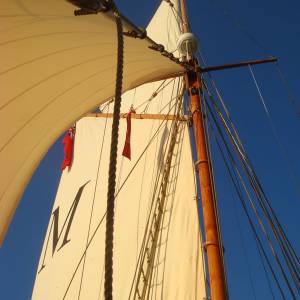 The legendary Fastnet race in Morwenna,
pilot cutter: On sale at Boatshed Palma.

A lot has been written about pilot cutters over the last few years as the resurgence in these seaworthy yachts has been extraordinary. They are not cheap, ranging from£275,000 to £450,000 for a newly-built example, yet their popularity is unwaning

When Steffan Meyric Hughes was asked to sail Morwenna in one of the most legendary ocean races of them all, he immediately agreed. With no time to do a survival course, he resigned himself, in the words of Blondie Hasler, to die like a gentleman.

Two days before the race, Morwenna was tied up at her usual berth in Shamrock Quay and during the long hot summer’s evening her crew trickled on board.
They knew each other from some of the shorter qualifying races earlier in the season, and went to the pub to enjoy a last few pints.

Racing pedigree
Morwenna really does race (she recently beat her fellow pilot cutters Amelie Rose and Polly Agatha in the Round the Island Race) and that means all five sails in anything below a Force 5: that’s jib topsail, jib, staysail, main and main topsail. That’s a lot of halyards and jiggers (hardeners on purchases for the halyards). And tacking, there’s a lot going on. Two sets of runners (one for the main mast, one for the top mast), and three pairs of headsail sheets, as well as the heavy single-ended mainsheet.

The next morning, maneuvering off Cowes, 300 yachts were swapping tacks all the way down the Solent to the Needles. High-speed press boats and spectator boats, as well as Grimalkin from 1979, carved through the crowd. Helicopter rotors thumped overhead, and the whole mad soundscape was punctuated by the deep boom of the cannons of the Royal Yacht Squadron. Morwenna got off to a good start, flying everything she had, including the bright orange storm jib as a jury watersail. She sailed steadily down the Channel, placing about halfway in her class, IRC3.
Things were looking good until the wind dropped, for the first of what would be many times. Off Portland Bill was a strange place to be anchored, too far from land, but having dropped the kedge next to a Nicholson 32, both of us sat there all night, taking turns to drag our anchors along the seabed, slipping backwards through the blackness, the stilled lights of the fleet all around us like fireflies.

If she’d just got the last mile or so around Portland’s headland on our tide, she could have ridden the back eddy in Lyme Bay, ghosting against the foul tide that would be running further out to sea, waiting for the next fair tide to head out again.

The next few days went by, marked by a succession of long 90º gaff-rigged tacks,as a balance was needed to find wind against the likelihood of what the wind would do later, the position of the strongest tidal currents and the likely sea state that all these would combine to produce.

They say the Fastnet is one of the stiffest challenges in yacht racing.
People would say it in such a way that implies that the Vendée Globe or Volvo Ocean races are mere warm-ups for the Fastnet. It’s misleading.

The Fastnet is a technical race, a challenge to ingenuity more than to endurance. Especially these days, when the fastest boats complete the course in a couple of days. Add to this the frequent fog and the busy shipping lanes, the need was to have five on each watch, even though conditions, never got hairier than the top of a Force 5. What is really needed is the power of prophecy.

The sea was running a decent swell, and every 20th wave or so we’d bear away to ride over a larger wave. Morwenna creamed along at nearly eight knots, a pilot cutter in her element, some real seas, she rode over the water with all the grand comfort of a flying carpet. Occasionally, the lee deck would ship some black Celtic Sea, which would come alive with phosphorescence, glittering towards the stern as it ran back to the ocean.

On Friday, day six, she was becalmed again. This time the crew baking on deck, dived off the shrouds splashing around in the Celtic Sea, praying for some wind. 24 hours later, surrounded by a pod of about 30 dolphins she ran back past Land’s End in perfect winds.

It’s the most famous yacht race in Britain, if not the world, due partly to the infamy generated by the 1979 race, in which 15 sailors lost their
lives after the 300-strong fleet was slammed by a Force-10 storm. Now
it’s named after its sponsor, Rolex.

The course is 608 miles from Cowes to the Fastnet Rock, off the southern
tip of Ireland, and back to Plymouth. It was first run in 1925, instigated by a yachtsman called Weston Martyr. Weston had sailed in the Bermuda Race the previous two years and wanted to start a similar race in Britain. He modeled the Fastnet on the Bermuda, with a similar distance – the Bermuda Race is 635 miles, just 27 miles longer. 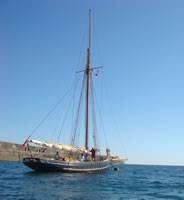 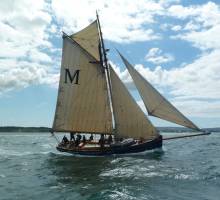 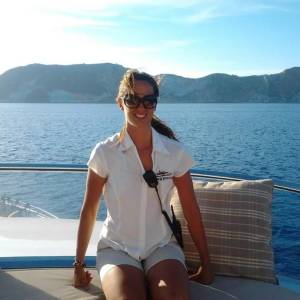